Does the label anarcho-capitalist accurately describe any libertarian?

Some libertarians — including some of our best friends — like to call themselves anarcho-capitalists (an-cap for short). But please consider three ways this label fails. 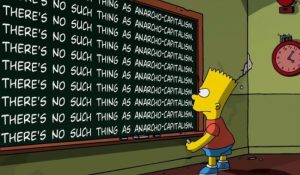 Failure #1: The word anarchy no longer means what it once did.

Anarchy meant “no ruler” to the ancient Greeks. Many modern libertarians use it the same way. But current usage defines the word as meaning violence, chaos, and lawlessness, largely because of bad things done by left-anarchists. Thus, the word anarchy no longer conveys what these libertarians want it to mean. An effort to restore the original meaning might be worthwhile were it not for….

Failure #2: The word anarchy doesn’t describe what most anarcho-capitalists advocate.

The term anarchist more properly applies to The State, which is indeed violent, chaotic, and lawless (unaccountable).

Failure #3: The label anarcho-capitalism assigns too much importance to capitalism.

The word capitalism describes only the part of the market process that uses savings to expand production. This excludes many other aspects of the market such as trade and prices. It makes no sense to use the name of a part to describe the whole.

It’s fun to shock and awe people. The term anarcho-capitalism certainly strikes a rebel pose. But after the fun is over, it makes sense in no other way. Labels like voluntaryist and post-statist do a better job and should be preferred.