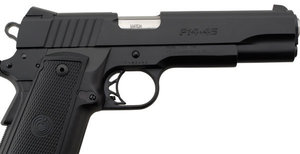 When someone says “There ought to be a law,” ask them this question . . .

They will probably give you a blank, uncomprehending stare, and say, “What?”

This is the response you want. It denotes confusion. And confusion can be the first step on the road to clarity.

“You’re advocating a law to control your fellow citizens. But what if they disobey your law? Will an agent of the state point a gun at them and force them to comply?”

Hemming and hawing may commence. Stuff like this, “Well, we won’t point a gun at them. We’ll just fine them if they don’t comply.”

“What if they refuse to pay the fine?”

“And perhaps leave them destitute, homeless, or hungry?”

“It’s for a good purpose. They should have complied.”

You may get silence and another blank stare, but press the issue…

“Is there any point in the enforcement process for your law where agents of the state show up with guns to force obedience?”

If the person is really advocating a law then he or she will have to admit that there’s a gun at the end of the enforcement process. Getting to this point is crucial to the task of critical thinking. We cannot think clearly about the nature of The State and The State’s “laws” without finding and taking note of the gun that lies behind all statism.

It’s one thing for laws to respond to initiated force for defensive or corrective purposes. That’s a legitimate function. It’s quite another thing for “laws” to initiate force against peaceful citizens, based on some scheme of social engineering.

Finding the gun helps to clarify what is really being proposed.

The question “Where’s the gun” should become as well known as “Where’s Waldo?” Now here’s the final statement in the dialog…

“Do you really think your idea for improving the world is so important that people should be compelled to obey it at the point of a gun?”

The person advocating the law may continue doing so, but because you drew attention to the gun, he or she can no longer be ignorant of the violence and arrogance inherent in the proposal.

Please join the Founders Committee for our Libertarian Census project.

12 different studies find that 30 million Americans currently self-identify as libertarian. Another 30 million hold mostly libertarian positions on the issues. The Libertarian Census will attempt to locate all of these libertarians and activate some of them to help create a libertarian America.

Goal: Raise $252,000, mostly in monthly pledges, to capitalize this effort.

The Founders Committee roster will be listed in order of contribution size. Donate here!

Copyright (c) 2013 by Perry Willis. Permission to distribute this blog post for educational purposes is granted, if done with attribution to the author and the Zero Aggression Project. Permission to use for commercial purposes is denied. You can find a full explanation of our copyright policy here.