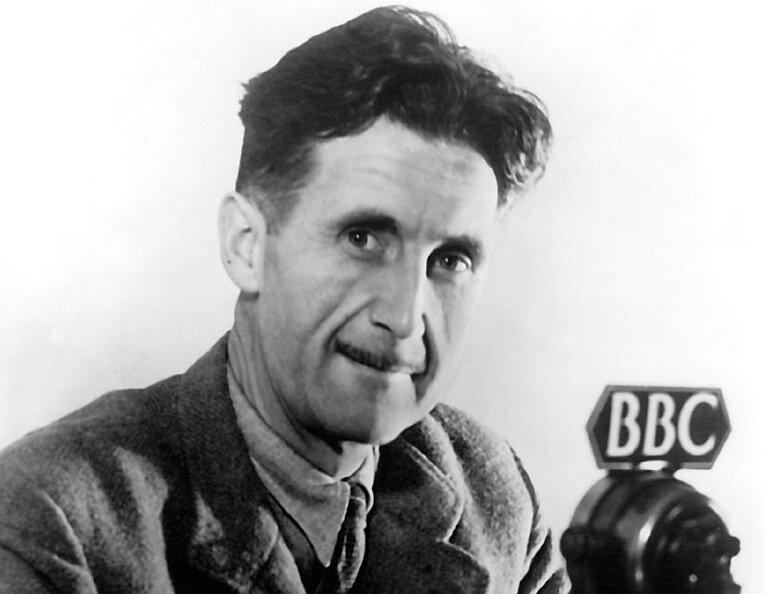 George Orwell taught us that language is a key front in the struggle for political power. He demonstrated this in both his classic novel, 1984, and in his famous essay on Politics and the English Language. Confucious made similar points in The Analects. In sum…

These are important questions. Let’s look at a few answers…

Most voluntaryists are not pacifists. We believe in self-defense and the defense of others.

Therefore, we do want a form of political power – the power to defend ourselves and others against political aggression. More importantly, we want to influence the way people think about politics. Words are the tools of such influence.

The things we advocate are congruent with the labels we give ourselves. But what about our philosophical opponents? Do they follow our good example?

A cornucopia of dishonest political labels

So-called liberals, conservatives, neo-cons, socialists, and progressives are supposedly in conflict with each other. And yet, they all share something crucial in common. They all want to initiate force to achieve their goals. This common love of aggressive violence contradicts the labels these groups give themselves. Initiated force (aggression) is inherently…

The socialists tell us they are the defenders of society and pro-social relationships. But their policies and actions contradict their self-awarded label!

Society is the sum-total of our voluntary interactions. But so-called socialists want vast numbers of things to be mandatory, not voluntary. And they advocate violence to enforce their mandates.

Using violence to make peaceful people obey your preferences is anti-social. I have an aphorism I use to make this point:

Nothing is more anti-social than socialism.

It would make far more sense to call voluntaryists socialists. After all, we are the people who favor non-violent and pro-social solutions. We advocate voluntary cooperation and peaceful persuasion in all that we do.

The word liberal used to mean one thing, and now it means almost the exact opposite. When the word first appeared it had to do with liberty. The people who founded the United States were liberals. The Declaration of Independence and the Bill of Rights were liberal documents because they advocated and defended individual liberty against state aggression.

But the meaning of the word liberal mutated during the second half of the 19th Century. Under the influence of so-called socialists and progressives, the word liberal came to mean the liberal (generous and expansive) use of state power to solve social problems. This was the exact opposite of what it had originally meant.

Ironically, the word liberal was stolen by people who advocated theft as a matter of state policy.

But by the end of the 1970s the violence-based politics advocated by so-called liberals had failed so completely (Vietnam, leftist political bombings, huge deficits, stagflation, and energy shortages) that the word became tarnished. In the 1980s it became easy to defeat politicians simply by accusing them of being too liberal. And so the word-thieves had to somewhat abandon the term.

The same thing happened to the word socialist. So-called socialism failed so catastrophically in so many places, and killed so many millions of people during the 20th Century, that it too had to be discarded. By the time the Soviet Union collapsed in 1991, very few people were still willing to call themselves socialists.

And yet, the desire to use state aggression to steal and/or control other people’s property remained. It simply had to find a new word to hide behind. This led to the widespread adoption of an even more mendacious label…

This was actually an old name. The so-called Progressive Era ran roughly from the 1890s to about 1920. The so-called progressives of that time advocated what would later be called liberalism.

The progressive label was used less from the 20s through the 70s, but was revived during the 1990s after bad outcomes had ruined the stolen word liberal.

Please notice the constant shape-shifting that goes on at this end of the political spectrum as labels are ruined, replaced, and then recycled. Please also notice that…

The progressive label is a presumptive close.

A presumptive close is an obnoxious sales technique that presumes a customer will buy a product pending agreement on the terms. But in reality, no such decision to buy has actually been made. In this case…

So-called progressives are asking people to presume that all their policies represent progress, while those who oppose their policies favor regression and backwardness.

This is both dishonest and arrogant. Indeed, the so-called progressives have …

That list of progressive failures is hardly complete. So the claim that progressives only favor progress, while everyone else is backward, is certainly NOT something that can simply be presumed.

The progressive label clearly attempts to manipulate potential customers while falsely flattering
current believers. This is con-artistry, not honest labeling.

But are the main progressive political opponents any better?

This list could continue endlessly. The conservatives are very much the amen corner for most “progressive” creations. They make a few nice sounds of opposition when the “progressives” propose their schemes, but then they constantly vote to maintain and expand them with no end in sight.

But what about the conservative claim to defend prudence? That one doesn’t seem true either. Republicans have tended to borrow and spend more money than even the Democrats. This commitment to an ever-expanding debt and constantly rising interest payments portends bankruptcy. That hardly seems prudent.

All mainstream political labels are fraudulent. And to the extent we voluntaryists use those labels, we are furthering the scam.

I think we need to stop letting our philosophical opponents define themselves using deceptive terms.

Instead, we need to replace their dishonest political labels with truthful ones. I think these new labels should focus on the one thing all these political gangs share in common — their statism.

The State is the entity that claims to have a monopoly over the use of aggressive violence in a defined geographical area. The State sometimes also uses violence defensively, and thereby serves a legitimate governmental function, but this is the exception rather than the rule. These few defensive uses of force give cover to The State’s true nature, which is aggressive and dictatorial.

Statism is the belief that it’s morally permissible for The State to use aggressive violence to impose things on peaceful people against their will.

A statist is a person who accepts and advocates the idea that The State can morally initiate aggression against people. All of the following groups are statist…

Does this mean we should just lump them all together under the label statist? No. What that provides in increased honesty, it loses in decreased precision. I propose a different approach.

I think we should combine the term statist with two other political labels – the Left and the Right. These labels are already understood and in wide circulation. They have a history. They are abstract but they commit no dishonesty. Thus, we should call the various statists by these two labels…

Start using these labels. They will avoid your participation in linguistic fraud, while also sparking conversations that will allow you to explain terms such as The State, statist, and statism.

Libertarians favor liberty and the label reflects that, just as the original liberal label once did.

Some people prefer to call themselves classical liberals for that reason, and that too seems clear and honest.

And Jim Babka has coined the term post-statist as an additional label for people who want to replace The State with voluntaryist forms of governance. That label also seems to be clear and honest.

It may be asked, aren’t some libertarians statist too? Yes, some are. Many libertarians advocate a minimal state. But that proposed state is even smaller than the one created by the liberal founders of the United States. If you want to call such people libertarian statists, that’s fine by me, but my main goal here is to persuade you to adopt the left-statist and right-statist labels as part of your everyday speech.

Go forth and speak honestly.

Perry Willis is a past National Director of the Libertarian Party, a co-founder of Downsize DC, and a co-creator of the Zero Aggression Project.