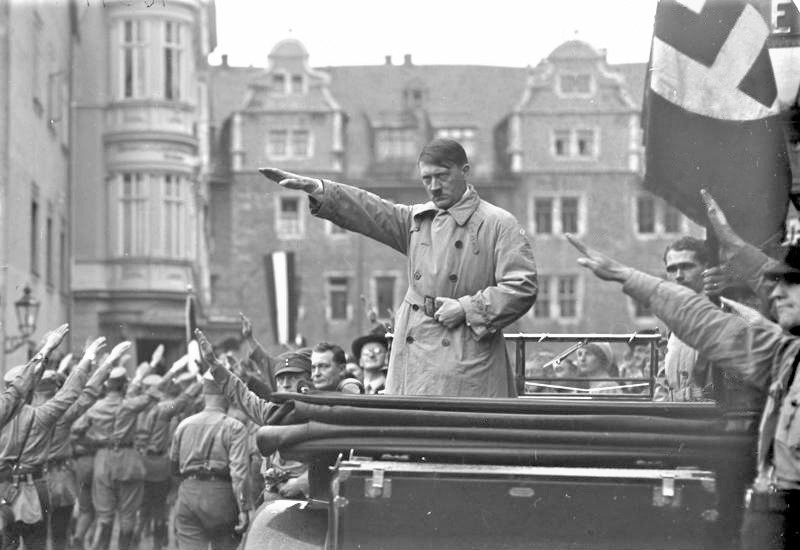 This is the fifth installment in a series of articles reviewing U.S. wars and interventions. I am trying to demonstrate four things…

I think the answer is yes. Two things were key…

One U.S. politician was complicit in both things — Woodrow Wilson!

The Importance of the Versailles Treaty

Responsibility for the Versailles Treaty lies primarily on Woodrow Wilson. His intervention in the war made the treaty possible, and his 14-points gave support to the crushing reparations payments the treaty imposed on Germany. The economic impact of those reparations gave the Nazi Party its first surge of support.

The German state had to pay its war reparations somehow. Inflation was one of their strategies. They started dramatically inflating their currency in June 1921. The inflation reached its peak in 1924. That was also when the Nazis ran their first election campaigns. You can see from the vote totals how they started strong when the inflation was high, but faded as the inflation ended…

So how did the Nazis gain total power a mere five years later?

The Federal Reserve and the Great Depression

Woodrow Wilson signed the Federal Reserve Act into law on December 23, 1913. Its purpose was to…

The Fed failed to maintain a stable currency almost immediately. It massively increased the money supply to fund the U.S. war effort in 1917/18. This produced some of the worst price inflation ever recorded in America. This inflation devalued savings and threatened retirement incomes. So…

When World War One was over The Fed contracted the money supply to absorb the extra currency it had created during the war. This move protected retirees by restoring the old value of the dollar. The Fed’s governors knew this action would also cause a depression. They were willing to accept that outcome because they believed rapidly falling prices would quickly restore prosperity. They turned out to be correct.

Understanding these points from the 1920 depression will help you see how Fed policies between 1929 and 1933 led to the rise of the Nazis. Let’s look at this story step-by-step…

It appeared as if the Fed was finally doing a good job of maintaining a stable currency — net price inflation for the decade was zero (as measured by current methods). But looks can be deceiving…

Economist Murray Rothbard argued that the money supply was actually rising in the late 1920s. This may not have been reflected in general prices yet, but it was surely evident in stock prices. Economist Friedrich Hayek noticed this at the time. He wrote a paper in February 1929 predicting that the Federal Reserve’s monetary expansion would lead to a crisis starting in the stock and credit markets.

Then came the bust

Hayek’s stock market prediction came true eight months later when the U.S. market crashed on October 29. But it’s what the Federal Reserve did next that really hurt.

Why did the Fed do this? It isn’t clear. There was no need to counteract price inflation as there had been in 1920. But what really matters is this…

It’s been said in various ways by various people…

“When America catches a cold, the world catches the flu.”

The U.S. is so large and powerful that everything it does impacts the world in a magnified way. That’s why, when the Federal Reserve crashed the U.S. money supply between 1930 and 1933 the resulting depression spread around the globe, including to Germany.

And the date range when the money contraction happened is the precise time during which the Nazis went from tiny to huge. You can see the change in the Nazi’s vote totals…

The U.S. roots of Nazi power

First, U.S. intervention in World War One gave victory to Britain and France, which allowed them to impose the harsh Versailles Treaty on Germany.

Next, the Versailles Treaty midwifed the birth of the Nazi Party

Then, Federal Reserve policies gave the Great Depression to the world and power to the Nazis

Now run the story another way…

The Nazis would’ve remained a tiny party of nutjobs, barely a footnote in history.

There would have been no World War Two and no Holocaust.

My previous articles have covered how U.S. policies helped create the Soviet Union and Nazi Germany. The next article in this series will show how U.S. involvement in World War One helped create radical Islam. Remember the four points I am trying to make with these articles…

PS: Here’s a list of books consulted in this series.

The rise of Nazi Germany