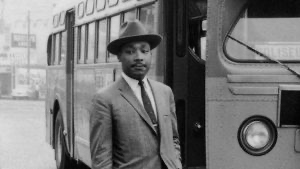 It’s an article of left-statist religion — bigots operating in the free market caused segregation and big government ended it. Both things are wrong. The reverse is true…

Two years ago, Susie and I toured Martin Luther King Jr’s boyhood home, the King Center, and the original Ebenezer Baptist Church. I returned home profoundly inspired to tell the true history of the Montgomery Bus Boycott. You see…

The local and state government wasn’t in a reforming mood. There were at least six vicious ways politicians tried to break the boycott, and they didn’t quit until years after it was over. You can read this highly-documented report on the Zero Aggression blog…

Check it out. Share it with others by email and in social media.